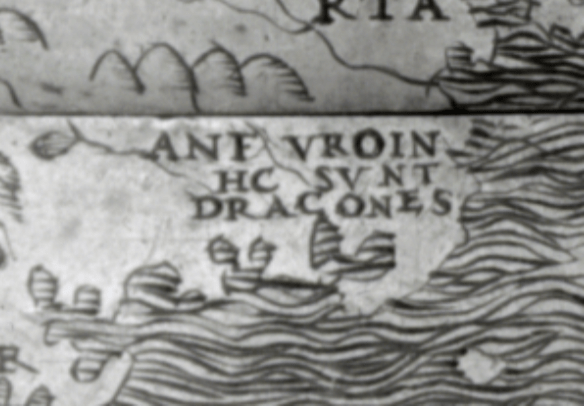 Here be dragons – how nonprofits can deal with risk & uncertainty

It’s hard to imagine a time before GPS and Google Maps, even back before the days of those AAA maps for long car rides. But before automobiles and trains or Trans-Atlantic flight, cartography was as much a mystery as it was science. In 150, Ptolemy’s Geographia warned of mythical characters that roamed terra ignota, or “lands unknown.” Later, and up through the 1500s, the Hunt-Lenox Globe, the most complete of its time, marked unknown areas with the Latin phrase “HC SVNT DRACONES,” or “here be dragons” near the coast of eastern Asia.

While cartography has improved tremendously in the last several hundred years, our fear of the unknown persists. In this current crisis at the dawn of a new decade, we continue to face down our own dragons of uncertainty.

In 1921, the economist Frank Knight distinguished between risk and uncertainty. He wrote:

There is a fundamental distinction between the reward for taking a known risk and that for assuming a risk whose value is not known. A known risk is easily converted into an effective certainty. While true uncertainty is not susceptible to measurement.

When Jong-Yong Yun became the CEO of Samsung, he built a culture of “perpetual crisis,” which for its merits and detractors, has become the world’s largest consumer electronics company. He reminds his team regularly of the disasters around the corner such as market implosions and Chinese competitiveness.

When a boat is sinking, it is important to plug the leak. And so, it is common in a crisis for nonprofits to rush to austerity, moving directly to cost cutting. This is a wise first step but obviously can curtail innovation both in the short and long run. The next urgent question, once the leaks are sealed, is to turn to the business model of the nonprofit and assess its weakness and instability. Paul J.H. Schoemaker, research director at the Mack Center for Technological Innovation reminds us that this, “in turn, can lead to restructuring and reinvention.” He goes on to caution against reliance on incremental innovation instead of the much-needed transformative innovation. “The largest gains…come from more daring innovations that challenge the paradigm and the organization,” Schoemaker says.

Disruptive innovation can often be seen as a buzz word in corporate circles. However, it is far too common to see nonprofits retreat to minor repairs of flawed systems rather than embracing wholesale innovation. There’s a balance somewhere between a constant state of crisis and embracing the chaos we are currently experiencing to see the probabilistic opportunities for change, growth, and impact.

“Almost all innovation happens by making connections between fields that other people don’t realize.” – Robert Lang

Innovation is closer than you think but your old maps will not help you find it. Today, you can take your strategic plan and your fundraising plan and put it to better use – as toilet paper. None of your current plans will be effective in charting the new waters we collectively face. That new map is about info-filling, adding as many details about your subsector, what’s happening in other sectors, what is happening in the larger economy, and globally to close the distance between what you know and what you need to know.

For far too long, nonprofits have left everything besides relationships and their services out of their thinking. Even when it comes to the evidence-based body of knowledge on fundraising practices, we “go back to our knitting,” according to Wharton management professor Mary Benner.

Nonprofit innovation should borrow a page from Google’s playbook.

There are actually nine principles from Google but the last one is: “Have a Mission that Matters.” I have no doubt that everyone reading this has a mission. I wonder if it’s a mission that matters. Does it matter to everyone at the organization and does it drive them waking up in the morning?

I’m originally from Minnesota, the North Star state, so it came as no surprise to me to discover that ancient seafarers used the star, Polaris, to guide their ships especially through uncharted waters. I was surprised to learn that Polaris only points true north twice a day. When they didn’t have a guide, they trusted their training and one another to keep them on the right course.

Sometimes, it seems as though we are adrift in an ocean that gets scarier every day. Our north star is a mission that matters and in nearly every case, that mission has no end. We will continue fighting disease and discrimination, protecting animals and the arts long after these turbulent waters subside.

Your work is important and so are you. We are all on this boat together and we’ll all get safely to the shore together.